I attended Aero India 2013 airshow on 10th Feb at Air Force Station Yelahanka, Bangalore.  This was the first airshow i attended with a 'proper' camera i.e. a DSLR :).  This was also the first airshow i attended in which a significant part of the air display comprised modern fast jets.  This post is about my experience photographing (and some video shooting) the airshow and lessons that i learned.


It was very dusty and there was a light easterly breeze so changing lenses out in the open would be quite difficult. The available options would be to use a sufficiently wide range zoom lens or carry multiple bodies with lenses of different focal lengths attached (like below). 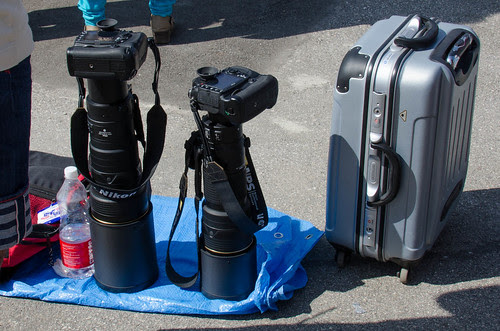 I had been using the D7000 and 18-300mm lens for the 4 months prior to the airshow so had a fairly good idea of the settings to use for photographing flying aircraft.

I had two main settings which i programmed into User Settings U1 and U2 on my camera.

I used U1 for photographing jets and U2 for propeller aircraft and helicopters.

The reason i used Manual mode has to do with the lens i used. As per my tests and the literature (dpreview.com , Thom Hogan), at 300mm, the Nikkor 18-300mm is sharpest between f/8 and f/11 (both limits inclusive). At the same time i wanted to use a shutter speed of 1/1000s (or more) for photographing flying aircraft and birds. I found that a combination of 1/1000s and f/8 doesn't overexpose even in very bright conditions.  For helicopters and prop aircraft it's advisable to use a relatively slow shutter speed (1/60 - 1/100s) to capture the full rotor/prop disc.  This requires flawless panning technique (which i haven't yet developed).  A problem with such slow shutter speeds is that a very narrow aperture will be required (to prevent overexposure in sunny conditions) which might cause the image to soften due to  diffraction.  A peculiar problem with the particular lens i used, which has also been mentioned in dpreview.com, is that its image stabilization (VR) is least effective at 1/80s and which starts to become ok again at about 1/160s. Hence, i settled for 1/160s and f/11 (for U2) for shooting helicopters and props.  This setting may cause up to a stop of overexposure (using matrix metering) in bright conditions but as i shoot in Raw, i haven't found this to be a problem. If i go slower than 1/160s, the percentage of keepers is very low due to motion blur caused by poor panning technique and/or the VR problem mentioned above.

I used Continuous Autofocus along with a single focus point at the centre of the frame.

I expected that 300mm wouldn't be long enough but i was pleasantly surprised to find that it was more than enough for most cases (except for shooting small prop aircraft at top of loop). All the aircraft filled the frame, and more, when they flew along the runway, which was 250 metres in front of the viewing paddock. Images of aircraft shot more than 800 metres away didn't come out well due to distortion due to heat haze, so having a longer lens might not improve matters in this case.

As per data i gleaned from Lightroom, with respect to my keeper images,  79% of them were shot at 300mm, 6% at 18mm (for the panoramic and crowd shots) and the remaining 15% between 18mm and 300mm (mostly for the head-on passes, static display and for fitting huge aircraft like the C-17 within the frame).

Still images are fine for capturing detail and for capturing a particular point in time but nothing beats a video for capturing the ambience of an event and for showing motion. Especially when the event is an airshow, a still image just can't reproduce, say, the sound and extreme speed of a fast jets in a head-on pass.

This was the first time i used a DSLR for video at an event.  Previously, i had used an SLT camera (Sony SLT-A65), bridge cameras and compacts for video. For bridge and compact cameras with their large depth of field, autofocus wasn't much of an issue. The SLT-A65 had exceptional video autofocus as it used phase-detect autofocus even for video. Unfortunately, in DSLRs (or at least the ones that i have used), autofocus in video is a joke - it's noisy, hunts most of the time and many a times refuses to focus at all. Autofocusing a fast moving aircraft is impossible.

Which is why i decided to use manual focus during video. I had used manual focus during video prior to this airshow, while shooting airliners and general aviation aircraft. I set the aperture to f/22 to get a relatively large depth of field (i got the idea from imaging-resource.com) then i set the focus distance to the hyperfocal distance, 200 metres (at 300mm focal length).  This gave me a depth of field from 100 metres to infinity. This is ok for an airshow as most of the air displays are at a distance of at least 200 - 300 metres from the viewing area. So, once i set the focus distance, there was no need to fiddle with it during the action.

A few words about zoom. Once i had set the focal length (usually 300mm), i used it through out the shot as it's difficult to smoothly zoom in and out while panning a handheld DSLR.  The only exception was when i zoomed out from a Flying Bulls Zlin Z-50 to capture a 'bomb burst' manoeuvre. The resulting clip was very shaky but i had no other choice at that time.

I shot at 1080p, 24 FPS (highest resolution on the D7000). I used Aperture Priority mode with the aperture set to f/22. In the D7000, once the aperture is set, it can't be changed for the duration of the video clip.  Also, in Aperture Priority mode, ISO is always Auto ISO (varies from 100 to 6400).  I also set the minimum shutter speed to 1/50s. This causes the camera to slow down to 1/50s before it shifts to the next higher ISO (when light level decreases). If light level becomes very low and ISO has topped out at 6400 then the D7000 will disregard this speed limit and slow down to 1/30s.

A happy side-effect of the narrow aperture (f/22) is that shutter speeds are usually in the range 1/50s - 1/100s most of the time, which is very useful in capturing rotor/prop blur discs.

I shot the video clips holding the camera at arms length, looking at the LCD. This is not the right way to do it.  I could barely see the LCD in the bright sun and it was very difficult to track something like a grey jet fighter against a greyish blue sky. This, along with poor panning technique, caused almost all my video clips to come out extremely jerky (enough to cause the viewer motion sickness :).  The jerkiness was alleviated quite a bit by using the 'Stabilize' function of Sony Movie Studio video editor but this cure had its own problems like shimmering/wobbly artifacts in places.

Here are some of the lessons i learned at the airshow. I could correct some mistakes or change my style as the day progressed but some other lessons i learnt only during post processing. Many of the points are subjective based on what looks/feels good to me.

Most of the points in this section are very subjective, based very much on what feels right to me. 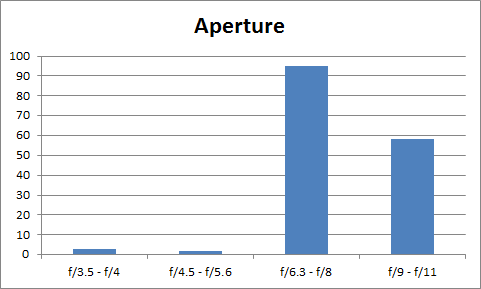 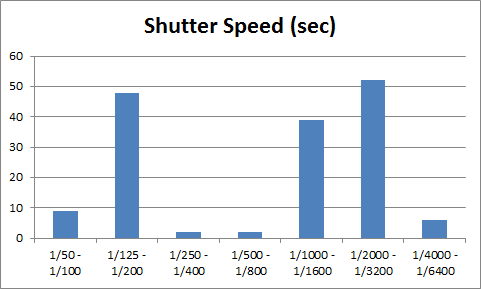 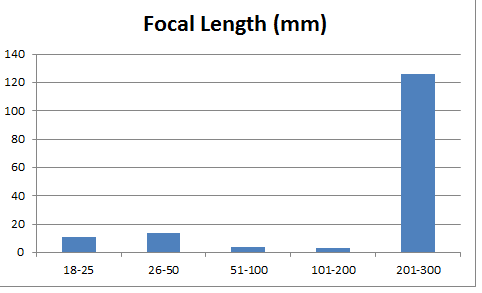 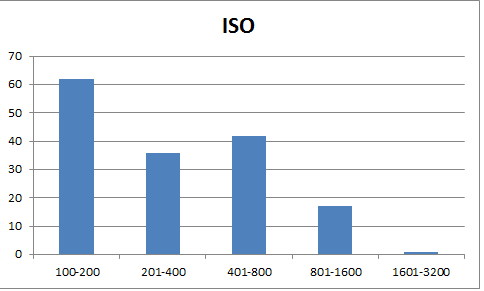 Camera gear at the airshow ranged from this... 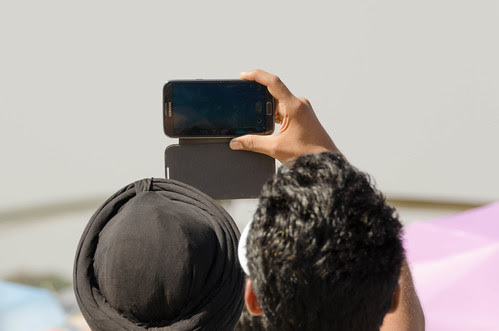 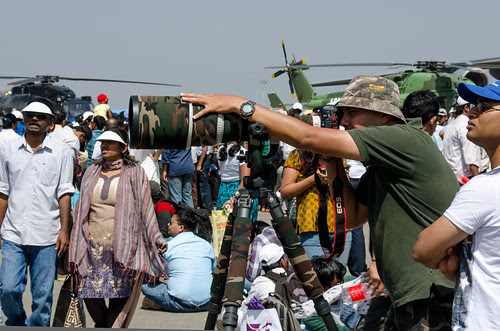