There's mainly two ways to solve a Rubik's Cube puzzle -
The algorithmic methods are relatively fast and are used by 'speed cubers'.

This post describes an Intuitive method to solve the cube. 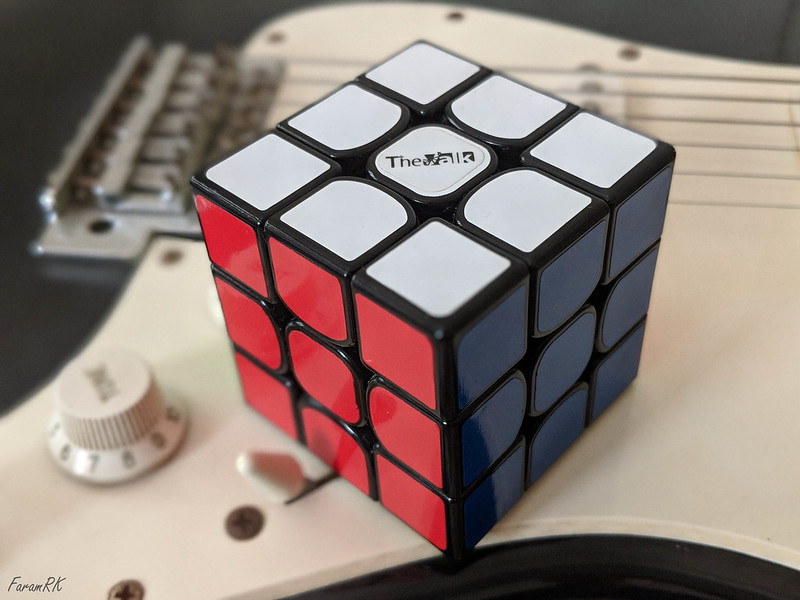 I'm no expert on the Cube. The method I describe in this post is based on stuff I picked up from the Internet and books, along with some of my own insights.

I'm not much interested in solving the cube using pattern recognition and memorized algorithms as 'solving' in such a way isn't satisfying - but that's just me. On the other hand, if your aim is to solve the cube in the shortest possible time then memorized algorithms (70+ algorithms) and lots of practice is the way to go.

A cube has 6 faces - White, Yellow, Green, Blue, Red, Orange. The centres of each face are fixed relative to each other. To solve a cube, all the pieces on a face should have the same colour as the centre piece of the face.

Piece positions are denoted by the faces the piece lies on e.g. the top-front-right corner is denoted by UFR.

Moving pieces from one position to another is called Permutation while rotating them is called Orientation.

A bit of cube theory is essential for solving intuitively. If X is a series of moves then X' is its inverse i.e. the inverse of each move in X in reverse order. e.g. If X = R D' F then X' = F' D R'. Performing a move X immediately followed by its inverse X' will leave the cube state unchanged.

Commutators are a series of moves of the form X Y X' Y'. Pieces that are at the intersection of X and Y will have their state changed while the rest of the cube will remain unchanged. A practical use case for a commutator would be to permute or orient corners in the last layer while keeping the rest of the cube unchanged.

It all sounds very abstract and maybe even a bit intimidating, but actually doing the moves is quite simple and intuitive as will be shown later.

The following sections describe each of the steps of the intuitive solution method.

The idea is to solve the 4 Edges of the first layer such that their face colours match the corresponding cube face centres. This is usually done on the White layer, hence the 4 edges form a white cross.

Its a good idea to try to solve the steps intuitively and only refer to the Tips if stuck - they are tips, not mandatory steps that need to be memorized :)

After the white cross is formed, flip the cube such that the Yellow centre is on top.

The idea is to solve the remainder of the first two layers except for one slot, the keyhole.

There are 4 Slots, each consisting of a corner on the bottom (D) layer and an edge on the middle layer immediately above its corner.

Once 3 slots have been solved, hold the cube such that the unsolved slot is at front-right position.

This step will solve the 4 edges of the Last Layer (U layer) and the middle layer edge of the unsolved slot.

This step will solve the 4 corners of the Last Layer (U layer) and the D layer corner of the unsolved slot.

The cube should now be solved, as shown in the photo at the beginning of this post. It's very satisfying to see a solved cube :)