VILH is a high altitude airport at approximate elevation 10,700 feet (runway is sloping), in the Ladakh region of Jammu &Kashmir state, India. It is an IAF airbase, but also open to domestic civilian traffic. The runway is unidirectional, due to nearby hills near RW 25 threshold. Landing is on 07 while takeoff is from 25. Only IAF fighter jets and excess powered transporters (like An-32) can takeoff from 07.

Unfortunately, there are no plates nor any detailed information about the airport procedures anywhere on the Internet. Hence, when I visited Ladakh recently (June 2016), I decided that I would note the approach and departure procedures during the inbound and outbound flights.


I flew in and out of Leh on a GoAir A320 (VT-GOJ) from Delhi. The flying time was 1' 03" on the inbound flight. It's a very scenic flight as one flies across the Himalayas. There's a very stark difference in scenery from the brown and green patchwork of the plains to the ice-capped Himalayas, thence to the barren brown and white scenery of Ladakh. 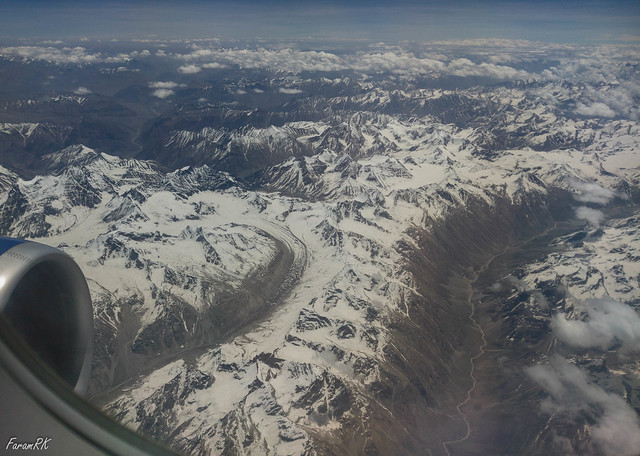 From VIDP, the route is north via W39, to intersection LELAX. From LELAX, the aircraft is vectored (or maybe its programmed in the FMGS) right to NNE to Tso Kar lake. Cruise level was FL 370 and top of descent (TOD) occurred 3 minutes before reaching Tso Kar (or 6 minutes after LELAX). The TOD point is nearer the destination than usual due to the presence of high mountains in the Zanskar range south of Leh. Ladakh is bounded by the Himalayas to the south and the Karakoram range to the north.

Overhead VILH, the aircraft joined left downwind leg of RW 07 circuit for 5 nm then made a continuous descending base/final left turn on exiting which, it was lined up to land on RW 07.  Just before lining up on runway heading, I managed to see the runway and the approach seemed steeper than normal, but that might have been an optical illusion due to the sloping runway.

Note - my phone camera stopped recording midway through the downwind leg. It was frustrating, to say the least, and may be equally frustrating for viewers of this video. My apologies.

After takeoff from 25, the aircraft turned right to WNW, then followed the Indus river valley, hugging the right (northern) side of the valley.

At the Indus-Zanskar Sangam (confluence), it turned left to SW and followed the Zanskar valley for 2 minutes.  Looking left, one can clearly see VILH runway in the distance, but it doesn't seem to be visible in the video.  Having climbed high enough to pass over the mountains of the Zanskar range, it turned left to heading SSE to fly direct to intersection LELAX, all the while climbing towards cruise altitude FL 370.

At LELAX, it turned south, flying over the Himalayas on W39 to Sarsawa (SP). Top of Descent (TOD) began 2 minutes before reaching SP. At SP, it was vectored right towards heading SW for joining the arrival flow into VIDP.

It performed a holding pattern near Rohtak after which it flew a straight in approach to RW 10, VIDP.